We recently finished up a set of 1 inch pin back buttons for friend & Vancouver artist Alex Stursberg, the 1" buttons where a spin off of individual characters featured on a series of skateboard wheels labeled Lil' Buddies for Momentum Wheel Co.

Check out these amazing 1 inch button sets that we just finished up for Alison McCreesh from Yelowknife N.W.T.

Check out these amazing 1 inch button sets that we just finished up for Alison McCreesh from Yellowknife N.W.T.

Check out these amazing 1 inch button sets that we just finished up for Alison McCreesh from Yellowknife N.W.T.

HOT off the Press for July 28th:

HOT off the Press for July 26th:

You can catch The Juice Truck pressing FRESH juice & smoothies daily at the corner of Abbott St. & Water St. in Gastown Vancouver.

HOT off the Press for July 18th:

17 daze till The Shambhala Music Festival!! -Salmo, BC

HOT off the Press for July 14th: BLIM

Just like that, BLIM now has 1.5 inch Diamond buttons! Check out their events page for July.

Frank Sidebottom was a much loved comedic character created by the late Chris Sievey in the 1980's. Frank is instantly recognizable by his large, spherical, cartoon head and sharp 1950's style suit. He reached cult status in the UK in late 80's and early 90's through numerous television and radio guest appearances, extensive touring, and his own TV shows. When Sievey passed away in June 2010 after a short battle with cancer a fund was set up to erect a memorial bronze statue of Frank Sidebottom in Timperley Village, his home town. This badge set has been created to help raise money for the fund and Six Cent Press is proud to have been of service in the effort. Please visit the Frank Sidebottom website for more info or to purchase a badge set. We salute you, Mr. Sidebottom! 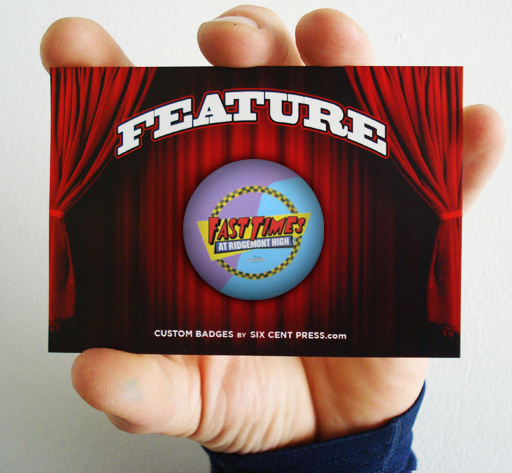 Empire Theatres along with Six Cent Press will be hosting & featuring a different fan favorite on the big screen on the last Friday of every month @ 7pm. All movie goers will receive a collectors badge of the month's featured film.